The tale of Trollpikken begun a long, long time ago
– before your grandfather was born, before the dinosaurs – yes, even before the first signs of any plants on our planet. Back then, deep down below an enormous mountain, the Trollpikken was born from warm and
red-glowing molten rock. Slowly but surely the mountain on top was worn down by the relentless forces of nature, piece by piece. Many years passed, with some very hot summers and some very cold winters, with rain flushing across the mountain side and wind carrying away dust and stones. Until one day, Trollpikken emerged from the depths of the earth and out in the fresh breeze, only to get covered once again. This time by the icy crust of huge glaciers that covered the land, the last of their kind.

Time went by, it got warmer once again, and the sun melted away the ice cover. Rocks reappeared all over, some looking like pixies, some like trolls, and some looked like imaginary creatures only born from your wildest fantasies. One of the rocks didn’t look like any of the others. It was standing upright, squeezed in between mountains, and its only wish was to get out and warm up in the sun. On cold and rainy nights, the water stored in cracks froze to ice. This made the cracks around the rocks to widen, bit by bit. Then, on a beautiful and sunny day, the rock finally felt the grip loosen and it started to fall towards the open. But the mountain wouldn’t give up and managed to grab the rock in the last moment. It got stuck on its lower part, but it had tilted out enough to both get a great view and to enjoy the sun –now it was satisfied.

Many years passed and one day a wanderer came walking by. He stopped to have a look and said to himself “Hmm, that rock looks remarkably like a troll’s penis”. And from that moment the Trollpikken had gotten its name. From then, one should think that the Trollpikken would get a long and peaceful life in the sun. It turned out that this was not the end of the story about Trollpikken.

Trollpikken quickly got known and people came from all over the kingdom to have a look at the tall and majestic rock. But one early morning visitors were met by a dreadful sight – the Trollpikken had fallen! Someone had through the course of the night used hammer and wedges to break down the rock. It was found in the mud just below the mountain above which he had towered earlier so proudly. The people of the kingdom wouldn’t accept the downfall of Trollpikken and tempering with natures course. They decided to redo the damage, no matter the cost. With sweat, muscle power, drilling machines, and a whole lot of glue, the Trollpikken was fixed back in its place. Again, it could enjoy the view of the valley and the long summer evenings. If Trollpikken wasn’t known before, it certainly was known now! People came from near and far to get a glimpse of this proud and bristling rock. To this very day, it´s still standing at the same spot it got raised. Enjoy your walk and leave nothing but footprints! 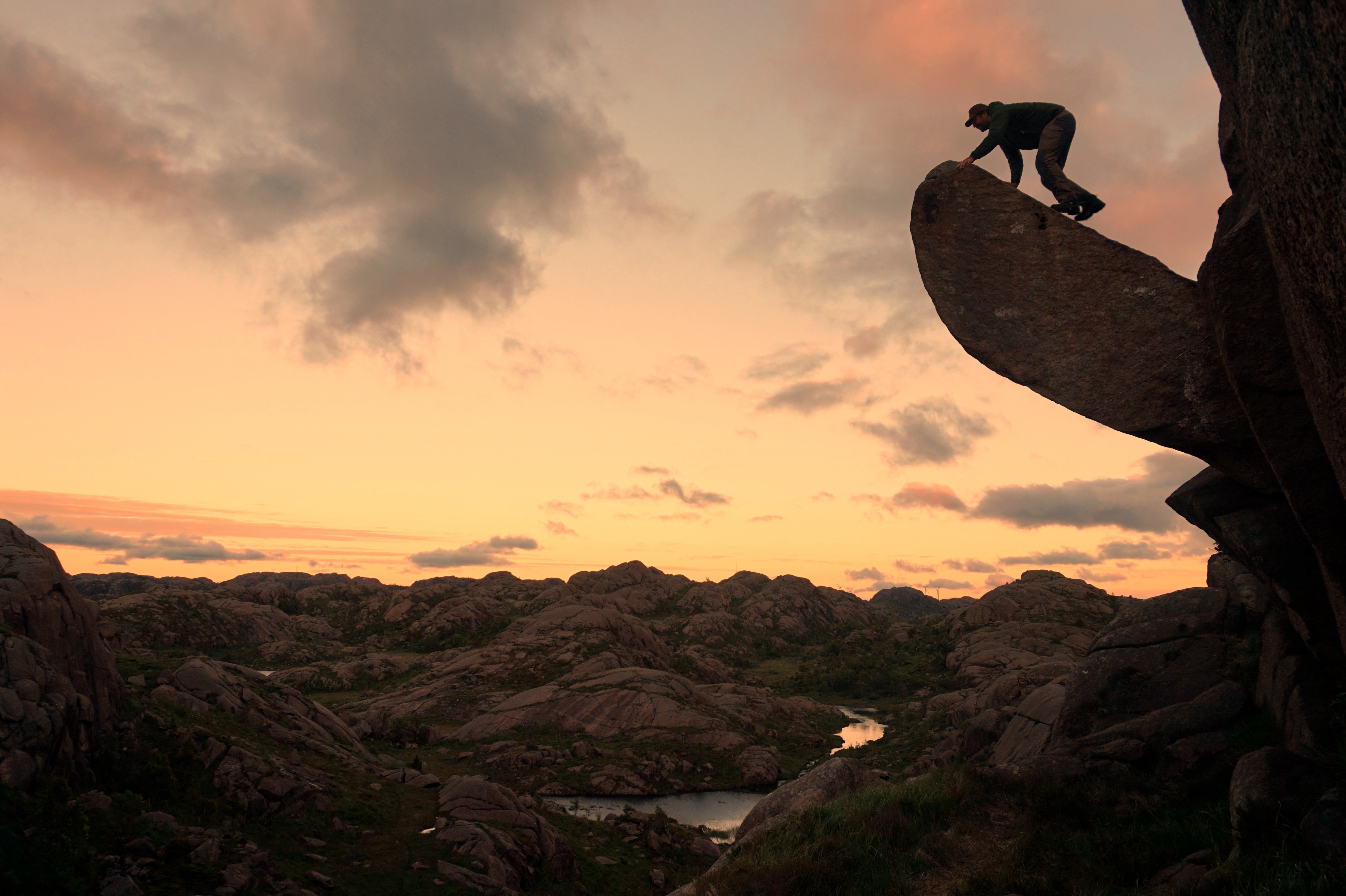 About 110.000 to 10.000 years ago, most of Norway was covered by a large ice sheet up to several kilometres thick. At the end of the last Ice Age the ice retreated and advanced at different times. Melting water from the retreating glacier ran into existing cracks in the mountains. When water freezes, it expands. The pressure that is applied to a rock by the expanding ice causes the rock to crack even more. This is called frost weathering and is a term for mechanical weathering. When the ice sheet melted away the overlaying pressure earlier caused by the ice disappeared. This resulted in a release in pressure, which again facilitated even more cracks to form. These two mechanisms, together with a bit of luck, lead to this special and unique rock formation called Trollpikken. The Trollpikken has been erect since the end of the last Ice Age – almost 10.000 years!

During the night of Saturday June 24th 2017, the rock formation fell victim to an act of vandalism. It was broken lose at its base with mechanical force and the use of tools. That same morning, the projecting stone boulder, with a weight of 12 tons, was found lying intact right below its foundation. A fundraiser was initiated to raise Trollpikken again. Quickly the target of 20.000 Euro (200 000 NOK) was reached. On July 6th, a local construction firm started the restoration and around 17:00 o ́clock the following day Trollpikken was erected once more – only 14 days after the vandalism!

To get the formation back in place, three holes were drilled into the block and the foundation. A 10 m high and 2.2 tons’ framework was put up around the block to support the hoists. Subsequently, straps were attached around the stone and it was lifted into place. Three iron bars, each 4 m in length, were led through the holes in the block and into the base. In a final step the fracture zone was reinforced with a curing epoxy (glue).